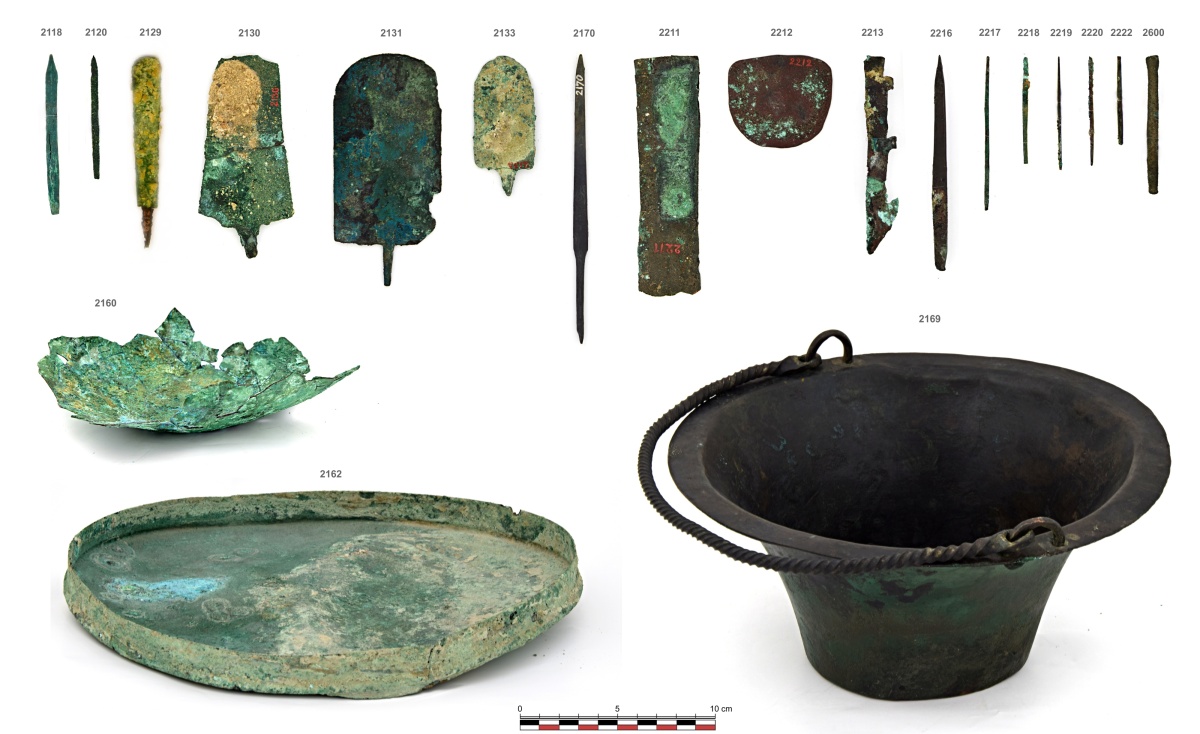 In March 2017, I wrote for the Archaeopress Blog about my book Old Kingdom Copper Tools and Model Tools, published by Archaeopress, with an accompanying promise to provide updates about further developments in our research in the future. The Journal of Archaeological Science has recently published the article “Invisible connections. Early Dynastic and Old Kingdom Egyptian metalwork in the Egyptian Museum of Leipzig University”.  This study moves further beyond typology, as our team has applied a wide range of archaeometallurgical methods to the assemblage. The first phase of the analysis of tools and model tools from Giza, currently deposited in the Egyptian Museum of Leipzig University (Germany), was presented already in the book, in this article other objects are added, as well as the results of the neutron activation analyses and lead isotope analyses.

The main surprise of the study was that a metal vessel deposited in a tomb at the Egyptian site Abusir 5,000 years ago was made of a material that was used concurrently in distant Anatolia (present-day Turkey). The article shows how far metals travelled in the third millennium BC.

The paper contains an in-depth analysis of 22 ancient Egyptian artefacts currently stored in the Egyptian Museum of Leipzig University (Fig. 1). The analytical work deepens our understanding of the use of copper in the Early Dynastic Period and the Old Kingdom. Egyptian copper metallurgy of the third millennium BC has been known only superficially until now.

The artefacts were found at the Egyptian sites of Abusir, Abydos and Giza. They were excavated in the royal tomb of King Khasekhemwy at Abydos (c. 2700 BCE) and non-royal tombs of officials from the Early Dynastic Period (Abusir; c. 3100–2900 BCE) and the Old Kingdom (Giza; c. 2350–2275 BCE).

The paper is innovative in the range of analyses used and their combination with Egyptological and archaeological information. The production methods were similar for all artefacts, which were hammered and annealed to their final shapes. They were made either from copper with minor impurities of other elements or from arsenical copper, the most frequently used alloy in the ancient Near East in the third millennium BC. As lead was present in minute traces in all the artefacts, lead isotope analysis has been used to indicate the origin of the ores.

As the title suggests, the analyses have revealed “invisible connections” between the regions where the ore was mined and those where the artefacts were deposited. The ore coming from the Sinai Peninsula has been expected and confirmed, as it was the most frequent target of ancient Egyptian expeditions with many ancient Egyptian mining expedition inscriptions. A not at all negligible amount of ore originated from the Eastern Desert of Egypt. There are not many inscriptions in that area, but the archaeological research of the past two decades has identified many mining sites, and analyses have now confirmed that the ore was indeed used by ancient Egyptians.

The greatest surprise was a large bowl from a Dynasty-1 tomb at Abusir (Fig. 2, 3). It is peculiar by its contents of arsenic (1.4%) and nickel (4.8%), very unusual for that period in Egypt. The lead isotope ratios match Anatolian ores and are similar to contemporary Early Bronze Age Anatolian artefacts, in a distance more than 1,500 kilometres (Fig. 4).

The vessel was most probably made in Egypt, but the ore or metal ingot must have travelled from far away. Although this is most probably not an evidence of direct contact between the two regions, special metals had circulated around the ancient Near East earlier than previously thought.

The project will continue with the evaluation and publication of data from another important corpus stored in Leipzig: bronze artefacts from the Second Intermediate Period and the New Kingdom site Aniba in Nubia.

The authors of the article are archaeometallurgist Jiří Kmošek from the Department of Chemical Technology, Faculty of Restoration, University of Pardubice; Egyptologist Martin Odler from the Czech Institute of Egyptology, Faculty of Arts, Charles University, Prague; and two physicists, Marek Fikrle from the Nuclear Physics Institute, Academy of Sciences of the Czech Republic and Yulia V. Kochergina from the Czech Geological Survey. In the same issue of the journal is also included an article of the Belgian team about the research of Early Dynastic and Old Kingdom metalwork in Brussels and a third piece, commenting both articles.

For further information regarding the articles mentioned above please consult the Elsevier Press Release by following this link. Sincerest thanks to Martin for fulfilling his promise to update us on his future research following the publication of his book in 2016. Read Martin’s earlier Blog Post here.