David Breeze provides an introduction and detailed context for his new book ‘Bearsden: The Story of a Roman Fort’ 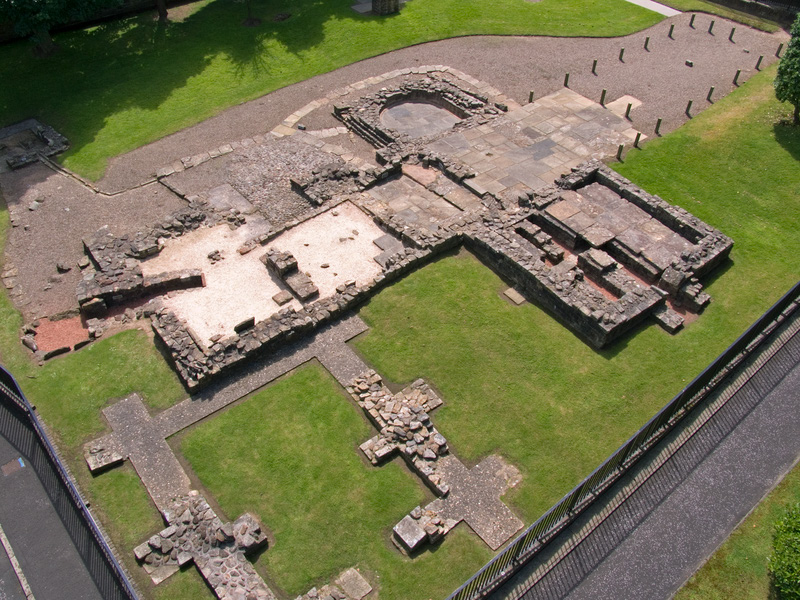 27 August 1973 was the first day of a project which was to last for 43 years. On that day, I cut the first trench in an attempt to re-discover the Roman fort at Bearsden on the Antonine Wall. The fort had been recorded about 300 years ago, and planned 150 years back when it still lay in open countryside. But in the 19th century, the urban sprawl of Glasgow reached the hamlet of New Kilpatrick. When the railway station was built, it was named after the farm of Bearsden and this is now the name of the local authority area – and the Roman fort.

On that first day, we were successful. In fact, in the first season we met all our primary aims. To locate the fort and learn about its history were 2 of these, but in addition we discovered the fort’s bath-house, and started to reveal the environmental history of the area. What was planned as an exploratory investigation of 4 weeks extended to a 7-week excavation with significant media interest and many local visitors. The bath-house was put under a temporary cover which was not removed until 1979 when the examination of the building was completed and it was consolidated and put on public display.

The bath-house was formally opened to the public in 1982 by the then Minister responsible for Culture in Scotland, Allan Stewart. In the meantime, every season from 1973 to 1982 saw the digging team return to Bearsden to continue the examination of the site. By the end, we had examined half a hectare, mostly concentrated in the northern part of the site which was to be developed. The local authority which owned part of the southern half of the fort allowed us to excavate the gardens and flower beds of their house so that it was possible to create a coherent plan of the fort and its annexe as well as explore areas beyond the defences.

The areas examined in the southern part of the fort were restricted, but there were also problems in the northern sector. Four late Victorian villas had removed evidence from their footprints. The creation of platforms for the houses had led to the importation of clay which had squeezed the Roman layers underneath. The trees were protected and this restricted where we could dig. Yet, gradually, piecemeal, the plan of the fort and annexe were created and the history of the site elucidated.

The first surprise was that the fort planned by William Roy in 1755 had been divided into 2 by its Roman builders. To the left of the enclosure lay the fort while to its right was a smaller annexe. The regimental bath-house and the latrine were placed within the annexe. The fort contained 2 stone granaries and several timber buildings. These included the headquarters, two barrack-blocks and three long narrow buildings of uncertain purpose.

The big surprise was that the plan of the fort had been changed during construction. It took us some time to realize this. The original fort covered the whole enclosure, but when only 4 buildings had been erected, or started, for some reason it was decided to divide the large fort into two, a fort and an annexe. The headquarters, which was probably the first building to have been erected, was not moved, but the single room of the bath-house which had been built was knocked down and a new bath-house built on a different alignment within the annexe. One stone granary had also been built, to the left of the headquarters.

The new smaller fort therefore contained a headquarters building placed, not in the centre of the fort, but to one side, and a granary. In the northern half of the fort were now built barrack-blocks and other timber buildings – and one stone granary. This was in a most unusual position, but this appears to have been the result of the change in plan. The granary should have stood in the centre of the fort next to its pair, but space had to be found for the commanding officer’s house, usually placed next to the headquarters, and this led to the second granary being placed in its unusual location.

As a result of these changes, the plan of the fort looked most strange. However, while preparing the plans for publication Dennis Gallagher realised that the fort was laid out to a grid based upon the Roman unit of measurement known as an actus, that is 120 feet square. The whole enclosure measured 5 by 4 actus. Half an actus in lay the rampart. The central east-west line ran along the road through the fort. What was also intriguing was that the revised plan for the fort appeared also to use the actus. All the timber buildings were about an actus long and the distance across 2 pairs of such buildings was half an actus.

This was interesting in itself, but the use of the same unit of measurement in the first fort and in its revised version indicates that both phases of activity were the work of the same team. An inscription demonstrated that these were soldiers from the Twentieth Legion.

The evidence for such a change in the building of a fort on the Antonine Wall has not been recorded elsewhere along the frontier. It adds another dimension to the complicated history of the building of the Wall.

Another aspect of life in the fort provided to be very interesting. So much of the 2 barrack-blocks had been excavated that it was possible to plot the distribution of pottery through the buildings. Nearly every room provided one or more fragments of mixing bowls, cooking pots and bowls and dishes. It would appear that the soldiers were preparing, cooking and eating their food in their barracks. As we found no plates, it seems that they ate the food out of the bowls or dishes, perhaps with their fingers. Other items lacking were cups and beakers: it is not clear what soldiers drank out of.

There was also a distinction between the rooms of the men and the quarters of the officers. The latter produced higher quality pottery such as imported samian ware.

Quantities of samian ware were also recovered from the bath-house. Here, the lack of mixing bowls suggests that food was not prepared in the building, but there were several bowls, including fragments of 8 samian bowls, but a fragment from just one cup. What is the implication? Did the soldiers drink wine from bowls? This is not impossible as one such bowl from elsewhere bears the message ‘drink from me’. Could they have held fruit and nuts? This is a reasonable possibility as fragments of both were found in the bath-house. Or, bearing in mind the distance to the latrine, did the bowls serve as chamber pots?

The latrine proved to be a rich source of information, or rather the adjacent ditch into which the sewage from the latrine had drained. The sewage told us a lot about the diet of the soldiers. Two types of wheat were found, emmer probably used for porridge, and spelt probably made into bread. Analysis of the residue in some cooking pots led to the identification of a third wheat, macaroni wheat. This, possibly imported from Spain, could have been used to make pasta or porridge or mixed with spelt to make brown bread. Barley was also found in the sewage, mixed with fragments of beetles. Whether the barley was contaminated and therefore dumped in the ditch, or whether both elements had passed through soldiers’ guts is hard to tell.

The sewage also contained locally gathered foods such as bilberry, blackberry, raspberry, and wild strawberry, hazel nuts, wild turnips, radishes, mallow, flax and celery. More exotic items were coriander, figs and opium poppy, probably imported from the continent. Olive oil and fish-based products came to Bearsden from Spain in large jars, while wine was imported from France. Among the less welcome imports were no less than 4 different types of grain beetles; it is a remarkable testimony to Roman transport arrangements that within a hundred years of the invasion of Britain in 43, grain beetles could have reached the north-west frontier of the empire.

Few bones survived at Bearsden owing to the acidity of the soil, but pig was certainly eaten. Yet, biochemical analysis of the sewage demonstrated that the diet was mainly plant based. The sewage provided evidence of an altogether different kind. It demonstrated that the soldiers suffered from both roundworm and whipworm and had fleas.

A Roman fort, practically any Roman fort, attracted women, merchants, publicans, priests and so on. We found little evidence for any of these, only potters. Three or 4 potters came to work at Bearsden. One was from the workshop of Sarrius who already manufactured pottery in two places in southern Britain. He appears to have come north with the army, or very soon afterwards, for part of one of his vessels was found in a primary level in the bath-house.

The fort at Bearsden did not have a long life. Built in or soon after 142, it lasted for about a generation. An inscription from Hadrian’s Wall dating to 158 points to the re-occupation of that frontier and the abandonment of the Antonine Wall. Two unworn coins of 154-5 suggest that Bearsden was abandoned soon after that date. The buildings were demolished and the rampart slighted when the army marched out and returned to Hadrian’s Wall. Some of their possessions were dumped in the fort ditch but the quality of the finds on the site suggests that they took all the better items with them.

The fort at Bearsden was built in an area of established pasture with some partially cleared woodland. Trees growing here included alder, hazel and willow; there was some oak and birch. Grasses, heather and rushes grew in cleared areas. The Romans used these local resources in the building of their fort: turf for the ramparts, wood for the buildings, rushes for the roofs, clay to plaster the walls of the buildings – and to make pottery – while further afield there was stone. When they left the site, nature took over, and this can be observed, for example, in the growth of aquatic species in the ditches. The denuded ramparts and the partially filled ditches were to survive another 1700 years before they succumbed to the ever-expanding suburbs of Glasgow.

The archaeological excavation had started in 1973 and was completed in 1982. By that time, analysis of the finds had begun. This was to continue through many years. It was not until after I had retired in 2009 that I was able to bring all together and finalise the report which was published in June 2016; in 4 months it had sold out. By that time, I had decided to write a ‘popular’ account of the site, describing how the excavation and post-excavation work was carried out and the report written, as well as not only discussing the discoveries made at the site but also placing the fort and its occupants in a wider context, and, finally, looking to the future because the completion and publication of the excavation report is rarely the end of the story. Already, the parasite eggs have been submitted to a laboratory for DNA analysis while colleagues write to inform me of new discoveries which are relevant to our findings at Bearsden. This is as it should be: research never stops.

David Breeze’s new book, ‘Bearsden: The Story of a Roman Fort’ is available now from Archaeopress and can be purchased in paperback for £20 and PDF eBook from £16.00 (+VAT if applicable)