Ian Meadow’s report on the Pioneer Burial is nominated for Current Archaeology Magazine’s Book of the Year Award 2020. Here, Ian relives the discovery and reminds us how serendipitous archaeological finds can be…

The Pioneer Burial epitomises the serendipitous nature of archaeology and the reason archaeologists do what they do. We had been working in the quarries at Wollaston from 1993 and had recorded two sections of landscape totalling a length of over 2 kilometres and over 100 hectares which was dominated by the remains of Iron Age and Roman settlement: a series of land divisions and then numerous small farmsteads, including honey bees from an Iron Age ditch and the first proven Roman vineyard in Britain. The whole site was arranged along a droveway that had its origins in the Iron Age and became a Roman road (perhaps running between Irchester to the northeast and Towcester to the southwest.)

The scale of works by the quarry was reflected by the machinery that was used to open up the ground, D8 caterpillar tractor units pulling box scrapers each weighing many tonnes. The scale of works, and the intention to return the ground to agriculture once quarrying had finished, meant large stacks of soils were created to preserve the agricultural topsoil and subsoil. Guidance on soils advised that, whilst topsoil could be stacked directly upon topsoil, a subsoil stack would require the topsoil removing so that it was stacked only on subsoil, thereby avoiding contamination. Areas of the landscape were therefore cleared of topsoil to enable the storage of the subsoil ready for reinstatement.

The discovery and excavation

Throughout the project a detailed metal detecting survey was carried out by Steve Critchley, the project’s detectorist, not just of the excavation areas but also on the footprint of these areas for subsoil stacks. As it was agricultural land the brief was not to bother with ferrous signals as they were generally nails, horse shoes or bits of tractor. One lunch time Steve came to the shed having recovered part of a bronze bowl and a decorative mount. From our previous experience we recognised these fragments as part of an Anglo-Saxon hanging bowl, an object-type of which there were around a hundred known at that time and which are often associated with rich Anglo-Saxon burials. Steve said that in the same area there were numerous ferrous signals. When we all went to investigate we saw that the bowl fragments were found about 1 metre from the edge of the latest area to have its topsoil removed, exposing the subsoil. If the area had been only slightly smaller it would never have been found. We carried out some initial excavation which exposed a long iron object, the sword.

We were very aware of the significance that a bowl and a sword indicated this was probably a rich burial but as it was Friday afternoon we would not be able to complete the excavation and recover the objects. I decided we should stop digging and conceal the grave location as best we could. We gathered an oil drum, various pallets and other bulky pieces of rubbish that we stacked on the grave, hiding its location to anyone that did not know it was there.

On the Monday morning we commenced the hand excavation of what we knew was likely to be a rich Anglo-Saxon grave. The digging was slow and careful with small tools so as not to miss anything and slowly but surely the remains of a bronze bowl, a long iron sword, a small knife, three buckles and a rough jumble of ferrous material was defined along with a couple of lengths of long bone, part of a cranial dome and bunter cobble. As these things were being exposed I tried to ensure the conservator was available to deal with the items. I duly phoned, only to be told he was out of the office. On the Tuesday, while the excavation continued, I tried again and got much the same response and on the Wednesday I was told he was on holiday until the following Monday. Knowing we could not leave the finds in the ground we carried on the excavation and recording of the grave.

Once everything was exposed and recorded we lifted the sword on a plank of wood (upcycled from a skip) and, to hold it together, we wrapped the rough jumble of ferrous material first in cling film and then in bandages soaked in plaster of Paris (the bandages came from the site first aid kit). This object was quite large, about the size of a big Christmas cake, but its shape was not clear. Whilst we wondered if it might have been a helmet we thought, given there were then only three other examples, it was unlikely; as a result the bags of stray pieces were marked ‘possible bucket’. Once all lifted the finds were taken back to the unit’s office in Northampton but no one else was told what we might have recovered. On the following Monday the finds were taken to Leicester and when we got the rough lump X-rayed and saw the distinct outline of a boar crest – it was obvious that what we had found was no bucket!

From that point on this burial dominated our lives. The quarry company (Pioneer Aggregates) funded the conservation and PR and the grave and finds were on the news around the world. As it was such a rare object, we had offers of help and support (much of it for free) from numerous specialists without which we would never have got all the information that features in the report. We also had ‘interesting’ offers including one from a member of the public who said he could trace his ancestry back to the God Odin and offered us a DNA sample to see if he was related to the body in our grave.

Given what we knew about the landscape in the quarry, a rich Anglo-Saxon grave was not something we would have anticipated and the fact it lay only just within an area stripped of topsoil shows how serendipitous archaeology is. We really were very lucky finding this grave that occupied only a couple of square metres in the hundreds of hectares we recorded and, ironically, the area stripped was ultimately not all used for stacking. 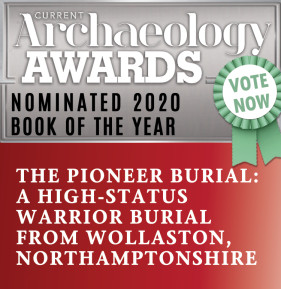 Sincerest thanks to Ian Meadows for providing this article for the Archaeopress Blog.

You can vote for Ian’s book here.

The book is available in paperback (£25) or PDF eBook (from £16+VAT) direct from Archaeopress.

The Parthian empire is by far the least understood of the great empires of antiquity. Until recently our knowledge has been both hazy and Euro-centric. In recent decades, however, new approaches have been adopted and these, together with new archaeological discoveries, are changing our preconceptions. Recognising this, in April 2020 the British Musuem will host leading international scholars presenting their most recent research on the history, culture and archaeology of the early Parthian Empire. Set against the complex political scenario of Iran, Mesopotamia and Asia Minor in the 2nd-1st centuries BC, speakers will address a wide range of issues on the rise of the empire and the relationship of the early Arsacids with their neighbours. Contributions will include re-evaluations of historical sources, analyses of material datasets, numismatics and reports on new work in the field. Specific themes addressed will include diplomacy, religion, sculpture, painting, chronology, ideological motifs, warfare and trade. This will lead to the promulgation of new models and a new understanding of the social, economic and political systems leading to the emergence of the Empire.

The conference will run in conjunction with two British Museum exhibitions – Rivalling Rome: Parthian coins and culture (April – September 2020) in the Museum itself; and the touring exhibition Ancient Iraq: New Discoveries, travelling to Nottingham and Newcastle (March-November 2020).

For details about the conference, including how to register, please visit the page on the British Museum website:

For any queries, contact the Organising Committee on parthia@britishmuseum.org