Paweł Gołyźniak of the Jagiellonian University in Krakow presents an introduction to his new book which aims to place engraved gems alongside literature, architecture, sculpture and coins in discourse surrounding Roman propaganda. 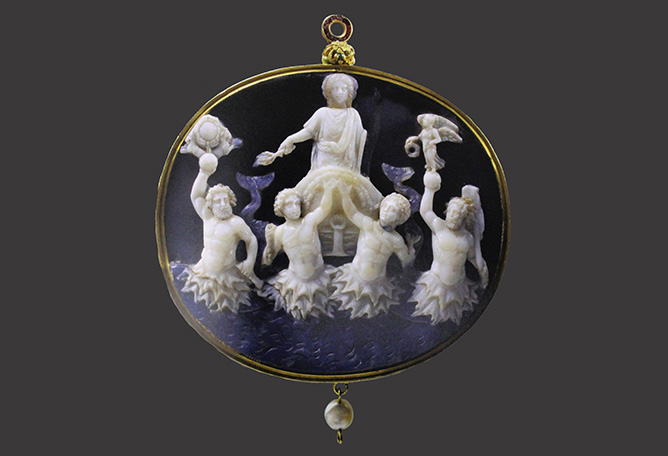 How did the Romans effectively communicate their private successes? Whom did they set as examples to follow? How did they manifest their political affinities? How did the political leaders of ancient Rome employ the noble and luxurious art of gem engraving for their political purposes? How did their official seals contribute to the spread of information on their successes and help to build up a positive image within the society? These and many more questions are answered in my book, Engraved Gems and Propaganda in the Roman Republic and under Augustus (see fig. 1).

I think it is one of the most important books on Roman gems ever produced, and hopefully it will become a standard work in university teaching…

Martin Henig, Emeritus Professor at the Faculty of Classics, University of Oxford

How did the book came about?

The book deals with small, but highly captivating and stimulating artwork – engraved gemstones (carnelian, agates, amethysts etc. with images carved upon their surfaces). I began studying them a few years ago when I accessed a long forgotten but magnificent collection of intaglios, cameos and seals in the National Museum in Krakow. That assemblage, composed mostly of the gems gathered together by one of the most successful Polish art dealers and collector Constantine Schmidt-Ciążyński (1818-1889), was my first major study, resulting in the publication of the ancient part of the cabinet in 2017.[1] This study was, in fact, the initial spark for my more comprehensive work on the use of intaglios and cameos for self-presentation and propaganda purposes in the Roman Republic and under Augustus. In Krakow, there is a good selection of stones related to this issue. Besides this, engraved gems have so far been somewhat neglected in the analysis of Roman propaganda, with discourse focused mainly on literature, architecture, sculpture or coins. Intaglios and cameos had multiple applications in Antiquity (seals, jewellery or amulets), but despite their various function, the images engraved upon them offer snapshots of people’s beliefs, ideologies, and everyday occupations. Thus, they cast light on the self-advertising and propaganda actions performed by Roman political leaders, especially Octavian/Augustus, their factions and other people engaged in the politics and social life of the past. The major aim of the new book is to place glyptics in the interdisciplinary discourse mentioned above, and fill this gap in the studies of Roman propaganda.

On 618 pages and with the help of 1015 mostly colour illustrations in Engraved Gems and Propaganda in the Roman Republic and under Augustus you can find out how gems can show both general trends (the specific showpieces like State Cameos) as well as the individual and private acts of being involved in politics and social affairs, mainly through a subtle display of political allegiances, since they were objects of strictly personal use. Gems enable us to analyse and learn about Roman propaganda and various social behaviours from a completely different angle than coins, sculpture or literature. The miniaturism of ancient gems is in inverse proportion to their cultural significance. My book presents an evolutionary model of the use of engraved gems from self-presentation (3rd-2nd century BC) to personal branding and propaganda purposes in the Roman Republic and under Augustus (until 14 AD). The specific characteristics of engraved gems, their strictly private character and the whole array of devices appearing on them are examined in respect to their potential propagandistic value and usefulness in social life. Hence, you can see that self-advertising through glyptics did not come out of nowhere in the early 1st century BC. Individuals used to refer to their personal accomplishments as early as in the 3rd century BC as we read in Pliny the Eleder’s Natural History book 37: ‘Intercatia, whose father challenged Scipio Aemilianus, and was slain by him, was in the habit of using a signet with a representation of this combat engraved upon it’. [2] People used to set the heroes like Achilles, Theseus or Herakles as examples to follow or even to act as a comparison. The display of family legends and origio stories was another important aspect of self-promotion through glyptics. For example, it is plausible that Ulysses engraved upon an intaglio might have been a reference to the legendary ancestor of the gens Mamilia (see fig. 2). The very same depiction of him welcomed by his dog Argos appears on the denarii minted by C. Mamilius Limetanus in 82 BC (see fig. 3). Even though gems’ iconography is complex, and often it cannot be determined if it represents one specific narrative, still gems seem to be as vital in the promotion of personal or familial stories as were coins.

I tried, in the presentation of this book, to make good use of more than one hundred Roman Republican and Augustan coins (counting only those illustrated, many more are referred in the text) in order to prove the numerous connections between glyptics and numismatics, not only on technical and stylistic grounds, but most importantly in the propaganda agenda they both transmit. Coins sometimes compensate for important lost intaglios like in the case of the two seals of Lucius Licinius Sulla and they offer immeasurable help with portraits’ identification as well as dates. The first seal of Sulla represented the dictator seated on a raised seat with a bound Jugurtha kneeling beside him while before him kneels Bocchus, offering an olive-branch. The seal portrays Sulla’s first great victory, in which he ended the Jugurthine War (112-106 BC) and its iconography was most likely based on the sculptural prototype which was a gilded statuary group sent by Bocchus to Rome and installed on the Capitol.[3] That event enormously boosted his political career and for a nobleman seeking to raise his authority it was a perfect occasion to promote his success. There was no better way to illustrate his exceptional military and political achievement than upon a personal seal. The seal itself as well as the statuary group have not survived, but the seal’s iconography inspired the son of Sulla, Faustus Cornelius Sulla (questor in 54 BC), who in 56 BC minted a denarius presenting exactly the same scene.[4]

However, the particular strength of gems if compared to coins and any other branch of art and craft is that they exhibit the real involvement of the society into politics and prove propaganda campaigns successfulness. This is due to the fact that they were strictly private objects; they carried images that people identified with. Hence, a portrait of a political leader like Pompey the Great or Julius Caesar upon one’s ring was a clear manifestation of support towards a patron (see fig. 5). Moreover, intaglios and cameos were both mass produced objects (especially glass gems) and the luxurious ones (for instance the so-called State Cameos). This makes glyptics particularly effective propaganda channel suitable for agitation and integration and reaching all social strata. The most effective with the employment of gem engravers for his political purposes was, of course, Emperor Augustus. He not only organised an imperial court workshop lead by the famous Dioscurides and his three sons producing intaglios and exceptional cameos for him, but was also quite influential on the whole glyptic production at the time of his reign.[5] This is clear from analysis of gems iconography since, for instance, many bear subjects related to the mythological foundations of the New Rome (see fig. 6). It seems that glyptics, apart from coinage and sculpture, was also another channel promoting Augustus successors because one finds their numerous portraits cut upon gemstones (see fig. 7).

Overall, the aim of my book is to offer new insights into the political and social affairs of ancient Rome. It should be of interest not only to those studying intaglios and cameos but coin enthusiasts will certainly find the exposed interconnections between numismatics and glyptics useful and interesting. I hope all those interested in Roman propaganda, archaeology and art will profit from the book as well.

Grab it and spread the word!

The eBook version of my book is FREE to download in Open Access. To download the free eBook or to purchase a printed hardback copy (£90), please visit: https://tinyurl.com/9781789695397

Paweł Gołyźniak works as a Research Fellow in the Institute of Archaeology, Jagiellonian University in Krakow. His research interests include engraved gems (ancient and neo-classical), Roman Republican and Augustan numismatics, history of antiquarianism, collecting and scholarship as well as 18th century drawings of intaglios and cameos and the legacy of antiquary and connoisseur Philipp von Stosch (1691-1757). Author of two monographs (Ancient Engraved Gems in the National Museum in Krakow (Wiesbaden: Dr. Ludwig Reichert Verlag, 2017) and Engraved Gems and Propaganda in the Roman Republic and under Augustus (Oxford: Archaeopress, 2020)) and more than a dozen scientific articles, most can be found on his Academia.edu profile: https://jagiellonian.academia.edu/PawelGolyzniak

[3] Plutarch, Life of Sulla, 6.1. However, Flower has suggested that Bocchus took the inspiration for his monumental sculptural group directly from Sulla’s ring device (Flower, H.I. 2006 The art of forgetting: Disgrace and oblivion in Roman political culture. Chapel Hill: 113).