Ancient states collapsed because they could not fulfil their core functions. This was because they failed to meet the conditions necessary to perform those functions. All this raises the questions of what those functions and necessary conditions were, and why they failed to meet them. Some readers might infer uncomfortable parallels with today’s societies or states but that theme is beyond the scope of this blog.

There is a considerable literature on the collapse of particular ancient states, much of it emphasising the role of a specific explanation for collapse. But mono-causal explanations are rarely sufficient and where multi-causal explanations are offered it is essential to analyse their dynamic interactions but relatively few studies do this. The aim here is to attempt a generic multi causal and dynamic framework to explain collapse.

We need to emphasise the importance of distinguishing between states and societies, a matter often bypassed by those who question the existence of collapse. States are institutionalised, centralised government structures whereas societies are the context of social structure, culture and common values in which states are moored. States can collapse as political entities while elements of their culture and values continue. To deny the collapse of the Western Roman Empire because elements of Roman culture thrived in Byzantium misses the point: states are political entities.

Ancient states were rooted in agriculture, sedentism and population growth. No state emerged without the presence of farming but farming is not a sufficient explanation of state formation: Mesopotamian crop management and animal husbandry long predated states. But grain especially was key to state formation, being taxable and useful paying soldiers and workmen. Growing population, enabled by improved diets, female energy and fertility, was the catalyst for state formation: meeting the demands for rising food production and distribution was beyond the management capacity of chieftains: assurance of food supplies was the founding core function of the bureaucratic state.

Nonetheless two routes to statehood were possible: consensus and egalitarianism or coercion and inequality; the latter tended to dominate or to supplant the former. They were fragile and prone to collapse.

Sometimes explanations of collapse are seen as competing alternatives (such as intra-elite rivalry, invasion, popular uprisings) whereas they are not mutually exclusive in reality. Explanations of collapse in terms of competing mono-causal factors are inferior to those incorporating dynamic, interactive systems. In particular simultaneity is often ignored: where a factor is both determined by another and helps to determine the latter. Invasion might be induced by perceived military weakness in the invaded state but such weakness might be explained by loss of territory and part of the tax base to invaders and a vicious circle of fiscal depletion and dismemberment sets in. Natural catastrophe like drought, causing famine and popular unrest, might be exacerbated by neglect and mismanagement of key water infrastructures such as irrigation, flood control and grain and water storage. Diagram A illustrates such a model.

Collapse should be explained as failure to fulfil the ancient state’s core functions: assurance of food supplies, defence against external attack, maintenance of internal peace, imposition of its will throughout its territory, maintenance of key civil and military infrastructures, enforcement of state-wide laws, and promotion of an ideology to legitimise the political and social status quo.

To fulfil these functions certain necessary conditions must be met. The legitimacy of the political and social status quo, including the distribution of political power and wealth, needs to be accepted; the state should be able to extract sufficient resources to fulfil its functions such as defence; it must be able to enforce its decisions; the ruling elite should share a common purpose and actions; the society needs to reflect a shared spirit (asibaya) and purpose across elites and commoners who believe it is worthy of defence.

Weaknesses and failure to meet any condition can interact to exacerbate the situation: maladministration, corruption and elite preoccupation with self-aggrandisement can induce fiscal weakness, reduced military budgets and further invasion; it can induce neglect of key infrastructures (especially water management). Inequality, a commonly neglected factor despite ancient texts, can erode asibaya and legitimacy and alienate commoners from defence of the state.

These themes are explored in relation to the Egyptian Old Kingdom, Mycenae, the Western Roman Empire (WRE), and the Maya. They all exhibit, to varying degrees, weaknesses in meeting the above conditions necessary for stability.

Although political collapse of the Old Kingdom is definite there is no consensus on the scope and severity of economic and cultural collapse. Drought, famine and intra-elite strife have been suggested as explanations for political collapse. Mass alienation and violence against the ruling elites has been suggested in ancient texts but their credibility is contentious. The evidence suggests systems failure and dysfunctionality including the incompetence and collapse of central authority and intra-elite strife (not least centre-provincial conflict); failure to finance and maintain key water management infrastructures by elites focussed on self enrichment; drought, the effects of which were exacerbated by that failure; loss of asibaya induced by huge inequality and the behaviour of selfish elites; and social conflict, possibly violent; loss of royal legitimacy in the face of drought despite the king’s supposed divine ability to guarantee rainfall and Nile flooding.

The political collapse of the Mycenaean palace states is beyond dispute. Some but not all aspects of their civilisation vanished. However, explanations of their political collapse (internal social strife including a Dorian peasant uprising, drought, invasion by Sea Peoples, earthquakes, intra-elite and interstate violent competition, and barbarian military technological advance) are particularly speculative because the very existence of possible explanatory factors is poorly demonstrated in the archaeological and written record, Homeric myth notwithstanding. Elements of the culture survived (religion, spoken language, some luxury artefact production) but others vanished, especially Linear B writing.

The WRE was dismantled by successive “Barbarian” invasions which should be regarded as factors in a dynamic systems collapse: unstable, ineffectual, corrupt governments, dynastic rivalry, intra-elite strife, economic and fiscal weakness and reduced military budgets induced barbarian invasion which further reduced the tax base and military funding. Aggressive imperial expansion itself had induced Germanic tribal coalescence which then exploited emerging Roman weakness and dismembered the WRE. The collapse graphically illustrates failure to meet the conditions needed for stability: effective defence against external attack, robust public finances, intra-elite cohesion, a society-wide spirit of asibaya – whereas the peasantry were impoverished and some collaborated with barbarian invaders or participated in Bacaudae armed rebellion ( the significance of which is disputed), commoner and elite acceptance of the legitimacy of the ruling regime, including willingness to support the state in the face of external attack.

The collapse of classic Maya states embraced the end of a political system and material culture but at different times in different places. Violent dynastic and intra-elite strife are probably sufficient to explain collapse; but they would have contributed to ineffectual responses to climate change, especially drought. Great inequality and peasant grievance, illustrated in ancient texts and by defacement of elite structures might suggest uprisings but such attacks on rich buildings and monuments might have followed collapse attributable to other reasons. Droughts arose at different times in different locations, although agriculture seems to have continued in some arid areas and evidence of drought in one place cannot explain collapse elsewhere. In short, ineffective government associated with internal strife along with droughts induced collapse but their relative contributions probably varied across the Maya states.

Despite assertions by Aristotle and De Tocqueville that inequality is a factor in collapse, no analysis of inequality as an explanation of ancient collapse has been attempted or even suggested in recent publications on either ancient inequality or collapse. Evidence of inequality exists: house and skeletal size, and grave goods demonstrate ancient inequality. But grievance induced by inequality alone is insufficient to provoke successful challenge to authority; leadership, organisation and resources are also needed. They were conceivably provided by the WRE Bacaudae but their role in WRE collapse is disputed although written evidence suggests discontented peasants sometime welcomed and assisted barbarian invaders. Violence by the poor is suggested as a factor in Old Kingdom and Mycenaean collapse but the evidence is disputed in both cases. Minoan and Mayan evidence of damage to elite property exists but it is not known whether this preceded or followed collapse of authority. One Pueblo study demonstrates lagged correlation between peak inequality and peak violence but no examination of possible socially differentiated skeletal trauma was undertaken. Such research could produce useful evidence of possible social strife as a factor in collapse. Lack of such evidence could indicate lack of interest in inequality’s contribution to collapse or its genuine unavailability.

The distinction between states and societies or cultures is essential: the former, political entities can collapse but not necessarily the latter so to deny state collapse because of the continuation of cultural elements misses the point.

Mono- causal explanations of collapse are inadequate but to acknowledge multi-causality is insufficient unless a dynamic interaction between various explanatory factors is recognised.

States collapsed when they failed to fulfil their core functions because they did not meet the conditions necessary for a functioning stable state. Such pre-conditions include legitimacy, a common spirit of asibaya, ability to extract sufficient resources to maintain key infrastructures and services, intra-elite cohesion, and the ability to enforce decisions across its territory.

The publication, available in paperback and online as a free-to-download PDF eBook, presents four brief case studies to illustrate and confirm these hypotheses. The main findings are summarised in the tables below.

Table A. Summary of Evidence of Collapse

Table B. Causes of Collapse 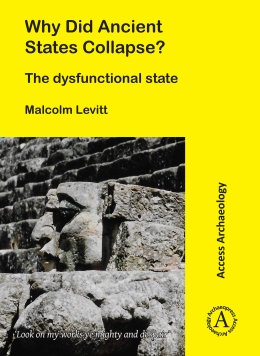 Buy in print edition or download PDF eBook for free at www.archaeopress.com