David J. Breeze introduces an edited festschrift volume, new from Archaeopress, where nearly 40 archaeologists, historians and heritage managers present their researches on the Antonine Wall in recognition of the work of Lawrence Keppie, formerly Professor of Roman History and Archaeology at the Hunterian Museum, Glasgow University

Arranging a Festschrift can be a fraught task. The organiser wants to honour the recipient, but if s/he is a university lecturer it is likely that the potential contributors will come from a range of interests, creating a rather disparate book, which in turn might have an impact on sales. With Lawrence, a former museum curator, the decision for Bill Hanson and myself was simple; the obvious focus of the volume was the Antonine Wall. After all, Lawrence had excavated throughout its whole length and curated its most famous artefacts, the distance slabs. Within a week of inviting all the archaeologists currently working on the Wall we had a full volume. Moreover, the 39 contributors, writing 32 papers, easily covered the wide range of Lawrence’s interests.

We start with looking at the Antonine Wall in its landscape and its impact on the indigenous population. The core of the volume are papers on the frontier and its artefacts, examining its building and occupation. The final section embraces Lawrence’s historiographical interests as well as the presentation of the Wall today and its role as part of the Frontiers of the Roman Empire World Heritage Site. Colleagues rose to the challenge of writing on Roman women on the Wall and on veterans for both of which there is so little evidence. There are papers here which we knew would interest Lawrence and acknowledge his major contribution to understanding Rome’s North-West frontier, including one on the structure of the Wall itself which goes to the heart of the monument as well as to Lawrencce’s investigations along its line. 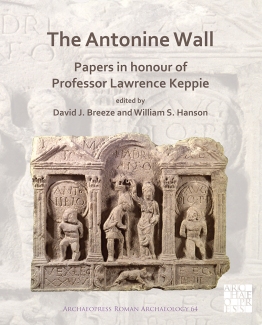 The Antonine Wall: Papers in Honour of Professor Lawrence Keppie

Cover image: The Distance Stone of the Twentieth Legion from Hutcheson Hill (RIB III 3507) found in 1969 lying face down in a shallow pit immediately to the south of the Wall (copyright Hunterian, University of Glasgow).