Alka Starac describes the surprise discovery of a Roman temple in Pula, Croatia

The rescue excavations during 2005-2009 in the northern part of the ancient centre of Pula, Hrvatska, conducted over an area of 4000 square meters and at an average depth of 6 meters, revealed at first the foundations of St Theodore’s Church along with a female Benedictine monastery built in the 15th century. The church was pulled down during the construction of Austro-Hungarian barracks at the end of the 19th century. It was the only building complex which had definitely been expected to be revealed during the excavations, as it was the only one recorded in historical sources. It was considered likely that there might be Roman city ramparts as well, but it turned out that the assumed ramparts were in fact the wall of a Domus and a sewer situated inside the adjacent Public Thermae, destroyed in Late Antiquity and completely forgotten since then. In addition to the rich and well-preserved Domus and Public Thermae, the remains of an Early Christian and pre-Romanesque church were found below and inside St Theodore’s Church.

The biggest surprise, however, was the discovery of the foundations of a Roman temple surrounded by portico, containing the deposit of more than 2000 almost fully preserved amphorae of Lamboglia 2 type, placed for drainage and levelling of the temple terrace. Excavations at the end of the 19th century only just reached the rear temple foundation wall without entering the sacred enclosed area, so no one could assume the existence of a temple located within the barracks yard and hidden beneath the foundations of the monastery. Also, no one could know that the southern foundation wall of the 15th-century church, reaching five meters in depth, in its lower parts was the southern wall of the Early Christian church and the outer foundation wall of the northern portico wing surrounding the Roman temple, dividing the sacred terrace from the adjacent Thermae located at a lower level. At this point, the continuous sacred verticale measuring five metres in depth was documented, comprising the historical period of 2000 years since the Roman colony of Pola was founded. 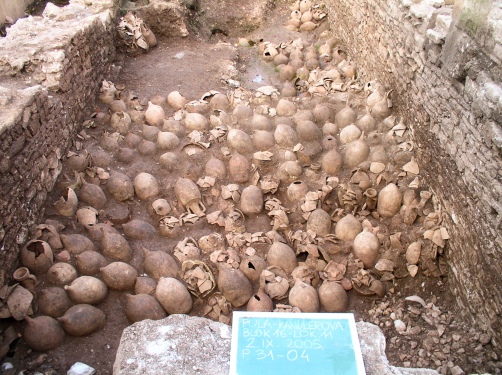 But this exciting archaeological story did not end there. Descending into the lower stratigraphical layers in the sacred temple yard, the pre-Roman continuity of the cult place worshipped by the ancient Histri during the Hellenistic period was documented. It turned out that the Histrian cult place, active throughout three centuries until the foundation of the Roman colony, was placed next to a water spring in the karst terrain. A well, four meters deep, was built at the spring during the construction of the temple terrace, appearing above the ground beside the entrance to the temple. A limestone square building block with a club in relief is the only clear link with a certain deity found in the excavations, and this is obviously Hercules. Hercules is well known for having a strong ties with the Roman colony of Pola, honoured as a divine patron of the colony that carried his name among other titles, and a protector of the city Gate of Hercules decorated with his head and club in relief.

My new book, dedicated to the sanctuary of Hercules, deals with the urban history of the Roman temple with portico, the role of Hercules in local tradition and gives an interpretation of the archeological remains. It offers a hypothetical reconstruction of the temple and portico based on the excavated foundations, scarce fragments of architectural decoration and Vitruvian rules. The inscriptions possibly related to the sanctuary are discussed, and finally the hypothetical calculations of the building period duration and construction costs are added.

The discovery of a completely-unknown Roman temple with temenos and portico rarely happens. The entire structure was demolished to the ground and replaced by much more modest buildings in Late Antiquity, so the lack of historical information is unsurprising. This sequence of events resulted in the loss of elements of the architectural decoration; only a few fragments secondarily used in later buildings survived. Instead of a typical Late Republican sanctuary enclosed by a three-winged portico with open front side, Hercules’ sanctuary shows an inverse plan with a portico wing closing the front side of the temple. The foundations of two portico wings were identified, while the third wing remains an assumption. The temple was a tetrastyle prostyle, only a little smaller than the Temple of Rome and Augustus at the forum of Pola. Following the collection of data of the cult of Hercules in Pola, Hercules emerges as the central figure of the sanctuary, which is also related to the presence of a spring as well as an ancestor, hero and founder cult.

I am grateful to David Davison and Rajka Makjanić, who gave me the opportunity to publish the results of my work concerning Hercules’ sanctuary.

Sincerest thanks to Dr Starac for providing this blog. Her book, Hercules’ Sanctuary in the Quarter of St Theodore, Pula (Archaeopress Archaeology, 2018), is available now in paperback (£32.00) or PDF eBook (from £16+VAT).

One thought on “HERCULES’ SANCTUARY IN THE QUARTER OF ST THEODORE, PULA”